Blocks down the rapids 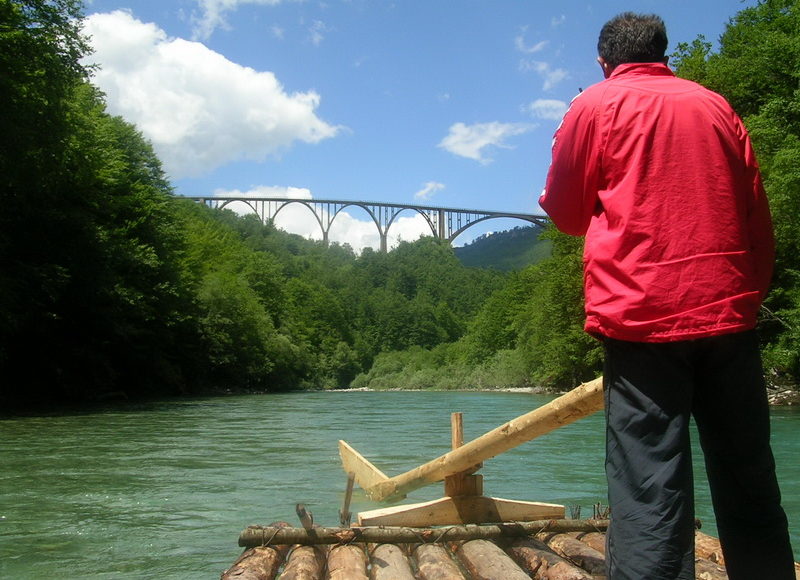 On this beautiful river, sailing for years Goran Lekovic, the last licensed on a wooden rafter abortion president “Trifitar” oldest association of rafters in Montenegro. This unusual man chose “most alluring vessel in the world and the most attractive” to describe his wooden raft that on it lowered its guests, who decide to go with him to feel the charm of this temple of nature and experience great moments with cascades, waterfalls and canyon in where the sky merges with the earth. Rarely today can boast of enjoying every moment of his job, but Goran is just one of them. While the memo to his peers chase the ball or dreamed about being be actors or musicians, Goran is more like a small make rafts, letting them down the river and dreamed of rafting on the Tara.

Explaining the difference between the rafters and the skipper, Goran says that rafters man who managed a wooden raft and must have experience of at least two to three years, and, although Montenegro has a significant number of experienced skippers who regularly completed the exam, there are plenty of those who came to the license, and that they never once let down the Tara River.

– I do not like when I see the skipper who never before did not see on the river is not as dense, driving a boat and did not know anything about Tari – he says.

Unlike such Goran Lekovic knows its every noise, every stone, every detail of the canyon, and he described the adventure of 82 km, starting from the second camp, Splaviste three km upstream from the bridge on Tara Đurđevića and ends at Scepan Polje.

– We sail a mile and come up with the shortest and fastest river in the Europe Ljutice, which is long 170 meters, still goes under the giant bridge, which since World War II was the second building in Europe, and as cribs largest in the world. The road leads us Trešnjevačka series of cascades where no one indifferent, then the monastery of St. Arhanđela Michael from the thirteenth century, and in addition to lever villages, where the remains of the Roman period. One of them is the sanctuary of the god Mithras, and there was an old Roman bridge that linked the coast with the north and on to Turkey – says Goran.

The road continues to the gate of the canyon, but the White springs, Obodin, Lazin stone Ninkovića port, canyon Drage and Radovan port, ordered the camp where pustnici usually spend the night after a long but wonderful day.

– At the gate of the canyon is Naviđen buk, where the impression is that there is no civilization, the only thing that can be noticed is hot and black sky over yourself. White springs are specific in that water comes from the Black Lake, which somehow found its way on the right bank of Tara. Obodina is where it seems that the sun is so far away that it still can be, almost not to see. The largest narrowing of five to six meters at Lazin stone, and it is here that the river is deepest – he says.

He further explains that Ninkovića port ledge in the canyon where once occurred stka from nearby villages and canyon Drage, which is 870m deep and a fantastic view.

The second day continues tepac near the village, where a lookout Đurevac, Tepacki beech, when you get to Bajlovića Sige, this waterfall is considered by many a wonder of nature.

– Ahead we can see that the sides of the canyon ddiruju sky. On the one hand Great Štuoc where the depth of the canyon 1,600 meters, and the other question, where the canyon provides a height over 1,300 meters, which reaches a height of canyons, Colorado, but it is so narrow that the eye looks like it’s larger than Colorado – says interlocutor.

Next, go to the canyon Sušice, where the remains of the wagon, from the time when the body was transported via the river, then Nozdruc, where Tara its force water from the left shifted to the right bank of the river. Then we come to “take the black” for inexperienced rafters Prodrta avalanche, because us Redini huge rocks, which can destroy an abortion if the Eudar into it. Then comes another waterfall Jovičića siga, as some call it “locust” because the water plunges 40 meters and continues to rest next to the old bridge that no longer work.

Yeah I remember from 20 years ago, when he served Piva to move to the other side of the river, where they led the way to Bosnia. From there, two kilometers floats to the bridge on the White hill, where it was planned hydroelectric. Even today you can see the remains of the well – reminds Goran.

Then he brings the cascades that can be dangerous to the inexperienced, but not for Goran. These are brštonovački, pine, Ward, Cells, verigovića, upper and lower, Papratište, wholesale goose and red rocks, the last two noise before Scepan Polje.

– I’ll stay loyal tari, there sma started, there’ll drive until I am alive. The other rivers do not go because I think there’s no one at the Tara. She once you love me, you love her to death. Rafting see it as a sport and not as a business, because they believe this is a short period of two to three months in the summer, how many tourists drive to achieve a significant profit – says Goran.

Explaining the origin of the name triftar, he says dates back to the nineteenth century, and was created by people who were transporting body, using materials of the river, so that in the translation of this word means rafter. His story begins in 1984, when he reported to training for rafting through the National Park “Durmitor”, who paid him a two-year school Uniturist companies from Foca, then the only company authorized to transport passengers river.

– At that time, in Montenegro there were rafters who are able to train young people, they did formerly triftari. In 1988 he became head of sma blue. Then rafting with us was abstract noun, I some exceptions of Slovenia and the Czech Republic – Goran recalls.

He said that at that time the rafting came only wealthy people, the government, ambassadors and famous sportsmen and people often between Colorado and chose tare Taru, delighted by her beauty.